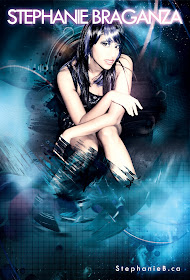 
Where were you born and raised?

I am of Goan heritage but I was born in Kingston, Ontario, then I moved to Toronto in 2003 to take Humber College's Jazz Vocal program. My Dad was born in Nairobi, Kenya; his parents came from Porvorim and

Colvale in Bardez, Goa. My Mom was born in Kampala, Uganda, and her parents came from Marjorda and Vasco in Salcete, Goa. In 1972, my Mother and her parents had to flee Uganda during the "Asian Expulsion" by Idi Amin. They were fortunate that Canada welcomed them as "Ugandan Refugees".
How do you think the environment you were in and your surroundings shaped you on all what you do now?
My Mom listened to a lot of various "oldies" growing up (everything from the Everly Brothers, Skeeter Davis, Connie Francis, Blondie). I found myself singing along at a young age and even trying to sing the harmonies. I actually didn't listen to much radio  until the late 90's. Two huge musical
influences for me growing up were Michael Jackson and Whitney Houston. In high school, my Mom introduced me to Ella Fitzgerald and that was when my love for Jazz (and Ella) were born. Going to a Jazz music school not only helped me learn about arranging and writing music, it also, unexpectedly, introduced me to Funk, Rn'B, Dance and House music. These genres all have an influence on my music today.
What led you to realize that you wanted to be a singer?
I have always loved to sing. I even remember my classmates complaining to my teacher in grade 4 because I wouldn't stop humming during class! However, I never thought it would pan out as a career for me. Toward the end of high school and with the wonderful encouragement of my guitar teacher, Bernie O'Connor, I decided to pursue music. What led me to realize that I wanted to be a singer was when I got accepted into both Queens University for Clarinet and Humber College for voice - I knew I would rather spend the rest of my life singing. The voice, to me, is the most intimate instrument of all.
How do you think you are impacting the South Asian community through your music?
I feel I am incorporating a lot of musical styles and influences. By singing in English and having some Western influences in my music I hope to be eclectic while attracting South Asian and non-South Asian people to my music. I plan to get more involved in reinvigorating the Asian Music Scene; playing at more festivals and really trying to express meaning in my music.
What are you currently working on?
All of my original work has been co-written with and produced by Colin
Stewart. I have demoed a lot of songs and am currently working on rewriting
and remixing those songs to be released to the public one song at a time. My latest song, also co-written and re-produced by Peter Linseman, is called "Good 2 Be" and will be available on my website www.StephanieB.ca and the iTunes store shortly. If you have an Android phone or iPhone, look up the free "Stephanie B" app for updates!
What do you have in mind for the near future?
I hope to come up with music that is not already out there; something unique and original. I know that is probably the goal of many artists (haha). Everything changes. At the same time, there is beauty in constantly inheriting music from previous generations and altering it - this is part of what inspires art and helps it evolve. Sometimes it is good to take from something that has survived; lasted. It's like musical Darwinism.
Career wise what is the one thing that has been very special to you?
Being able to pursue music wholeheartedly has kept me sane. I thrive on singing ballads from the depths of my heart, or rocking out with my entire being, and sharing that with the audience and getting reciprocation. Being South Asian, there is often much demand, especially on women, to go into specific careers - I want to send the message that it is alright to go against the roles that society commands upon us. Many of us in society are hesitant to break out of tradition. So inside, they either enjoy the people that bravely do, or they look down upon them for stepping out of the cultural norm. I once had a south Asian woman come up to me after a show, and tell me how much she wished she had pursued her love of music. Instead, she was pressured into marriage and had a large family, so she had no time to fill that musical void in her heart. That made me realize that I don't ever want that to happen to me.
Do you have any particular project you have wanted to work on or be a part of?
I would love to be part of more South Asian festivals. I had a wonderful time performing at the Exhibition Centre for the 2010 "Masala! Mehndi! Masti!" festival!
Any thing else that you want to share with our readers?
In music, when you are responsible for your own creation, there are no boundaries. I believe this is the same in all aspects of life.
Visit: http://www.stephanieb.ca
StarBuzz at 2/22/2012 08:06:00 AM
Share

Your comments are welcome.